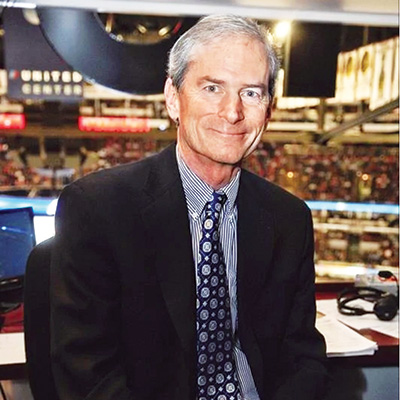 Don’t cry because it’s over. Smile because it happened. As the mother of three, it’s a phrase I often use to coerce my young children home from the park or console them as a lost balloon floats skyward. But it’s one I repeated to myself as the Blackhawks game ended last Thursday. The mic belonging to Pat Foley, voice of the Hawks, went quiet, closing a chapter that spanned the majority of my life.

But I’m not alone. Watching Foley stand on the ice with his family, including his mother, Mary, before the game began, he delivered a heartfelt farewell to the team, organization, and fans before heading up to the press box to call his last game. “I’m the luckiest guy in the room,” he stated. We’re lucky, too. I doubt there was a dry eye in the Madhouse.
A few weeks previous, the legendary broadcaster took time to reminisce with my siblings and me over a couple of beers. He recounted a few memories of a wildly successful career that spanned more than three thousand games. We realized the first Blackhawks game this broadcasting hall of famer called, was also the first one I attended. I was six.
My family held season tickets for three decades. During hockey season, household and activity schedules were largely planned around the Blackhawks game schedule. For home games, at least. My whole growing up, Hawks games were almost always played on Wednesdays and Sundays. And come what may, my dad and whichever of his four children’s turn it was to attend, were there. We rarely missed. Even on holidays, we would go after the family celebration. Unfinished homework was completed while zipping along the Eisenhower from the western suburbs, first to the Chicago Stadium, then later the United Center. Spelling words and multiplication tables had to be memorized before passing the giant, 70x40 foot illuminated Magikist lips at Cicero Avenue, dutifully landmarking the three-quarter point in the journey.

We always arrived early, eyes carefully scanning the throngs of mostly male fans chain smoking in clusters in the low-lit corridors off the mezzanine. Those were the days you might have spied a player not on the roster that evening, just walking around the stadium. Carefully avoiding beer puddles on the stairwell up to our seats, we greeted the biweekly group of fans that was our section, 112. The Barton organ played as Steve Larmer and Dennis Savard hurled their final warmup shots toward Murray Bannerman. Fans affixed homemade signs of encouragement (or disdain, if the Red Wings were playing), to balcony railings. A few minutes later, the fluorescent house lights went down as fans rose from their worn, black and red tweed seats to accompany Wayne Messmer in “The Star-Spangled Banner,” the official start of the game.

As the lights came back on and the jumbotron horns blew, the game began. Pat Foley, the voice of the Chicago Blackhawks, was already at work in the press box above us, reliably accounting every play for fans tuned into WBBM. For the years before Hawks home games could be seen on TV, and for all away games, fans trusted Foley for a play-by-play account of the action. And he delivered. Every time. President and CEO John McDonough accurately described him as “synonymous with Blackhawks hockey, with a voice that resonates loudly to our entire fan base.”
Foley recounted a few memories:

"I knew I wanted to be a sports broadcaster at ten years old. A sunny afternoon at Wrigley Field spent with Jack Quinlan and Lou Boudreau planted that seed. My father, Bob, owned a Buick dealership that sponsored the Cubs, hence the invitation to the radio booth that day. But that wasn’t the only time my dad came through for me. He was instrumental in my getting the job with the Blackhawks. He got me to the right place at the right time.

I had called hockey and baseball games during college. After graduating from Michigan State, I was broadcasting for the Grand Rapids Owls, a former EHL (Eastern Hockey League) team. When the team folded in 1980, I was out of a job.

The Hawks announcer from that season had lost his voice, so they were looking for somebody. One day on his way home from a routine car servicing at Foley Buick, Michael Wirtz found himself listening to a broadcast of me calling a Grand Rapids Owls game, which my dad had strategically placed in Wirtz’s tape deck. Michael passed the tape on to his brother, Bill Wirtz, the owner of the Blackhawks. He said ‘hey, there’s this kid from Glenview who might be okay.’ I had already secured a job with a minor league hockey club in Erie, PA, but I was thrilled to end up with the Hawks instead!
It’s been a great run. I’ve seen lots of changes from the beginning of my career until now. When I think back to the schedule the team followed- we flew to games on Friday night on commercial flights (no charters back then), played the game on Saturday, then stayed the night. We got on a 6 a.m. bus for the airport the next morning. Guys would go home and take a nap, then get up and come down to the stadium to play Sunday night. It was crazy! And suffice it to say we didn’t exactly stay in five-star hotels back in the day! (Foley laughed)

But make no mistake, I’m the luckiest guy in the room. I’ve loved calling the games. I always figured I worked for the fans. I hope people came away from my broadcasts not only having a good picture of the game, but maybe having learned something as well. Not everybody knows what ‘offsides’ means. I’m happy to pause and explain it."

There’s no doubt the games won’t be the same. We’re going to miss hearing his iconic, enthusiastic “he shoots, he scores!” and “Hawks win! Hawks win!” the phrases that have come to be his calling card. Two generations of Hawks fans are grateful Foley himself, shot and scored.

My family always left the games halfway through the third period to beat the rush out of the parking lot on Madison. Our parking attendant, Jimmy, always had our car warmed up and ready to go, radio set to WBBM, to hear the last of the game as we headed west. “Drive safely, Doc,” he’d always say to my dad. About the time we were passing the Ferrara Pan Candy sign on our left, Foley would be signing off. “We hope you enjoyed the broadcast. We KNOW you enjoyed the outcome.” Yes, we did.

The writer gratefully acknowledges the time and effort put forth by her father, Richard Callahan, to teach and foster a love for the game of hockey to his family. Maureen Callahan is a freelance writer and Contributing Editor for Hinsdale Magazine Group.