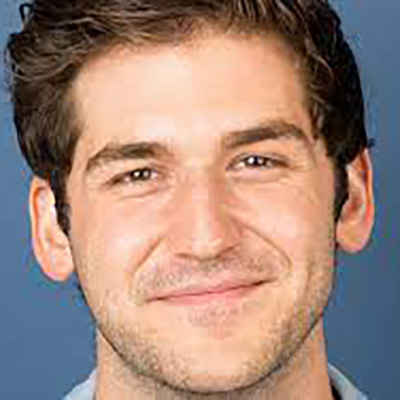 By Mike Danahey
Actor Jack O’Brien comes to Chicago soon with the national tour of Fiddler on the Roof - and for  a brief homecoming.

“I was here with Fiddler in 2018 at Christmastime and saw my family then. They are so ready to see more live theater,” O’Brien said.

So much so, O’Brien said, that 20 friends and family will be attending one of the matinee performances.

O’Brien now lives in New York City, but grew up in Elmwood Park. He attended St. Patrick High School in the Belmont-Cragin neighborhood on Chicago’s northwest side. And he holds an MFA from Millikin Unversity in Decatur.

“I’m an Irish Catholic boy. I remember the extended family of O’Briens and O’Connells getting together every St. Patrick’s Day for corned beef and cabbage,” O’Brien said.

O’Brien noted, too, that he and his brother would tease their father about the results of his DNA ancestry.

“His (results) came back 100 percent Irish, but the family has been in the Chicago area for four or five generations,” O’Brien said. “We wondered how that could be.”

Of course, familial traditions, roots - and being uprooted - are themes explored in Fiddler on the Roof.

The classic Broadway musical explores life in the Jewish community in 1905 Anatevka, a small Russian town on the verge of major social upheaval.

O’Brien plays Fyedka, who falls in love with Chava. The character is Russian, but not Jewish. That’s a big issue for Chava’s father, Teyve, a milkman of meager means looking to find good provider husbands for his five daughters.

“That my character is not Jewish pushes Teyve to the breaking point,” O’Brien said.

O’Brien said he finds Fiddler’s focus on family traditions relatable, given his growing up part of a big, boisterous extended Irish clan.

“Sometimes you’d feel like you were competing for the spotlight. But my family has been very supportive. They pushed me to pursue my dreams,” O’Brien said.

That pursuit has already taken O’Brien to some exotic places. In one case, that involved being green, just not in the Irish sense.

O’Brien was the alternate for the lead role in Shrek, The Musical. The international tour made stops that included Istanbul and cities in China. It also meant spending 90 minutes getting made up for the part and donning a fat suit a couple times a week.

“It would get so hot, I’d sit in front of a giant fan to cool off,” O’Brien said.

O’Brien has been with the touring company of Fiddler on the Roof since it hit the road back in 2018. The COVID-19 pandemic brought that tour to a halt.

“We were in Detroit when that happened. We saw the NBA cancel its games, then Broadway cancel shows and tours,” O’Brien said.

With the pandemic waning, Fiddler returned to touring earlier this year. It will be visiting cities across the US at least through early 2023.

O’Brien said while some of the cast moved on to other projects, a good many returned to the show. The veterans have been giving newbies pointers about the musical, too.

“For those of us back, it’s also a chance to say, ‘Hey, we made it through’ and appreciate that,” O’Brien said.

As for coming back to Chicago, there’s at least one thing to which he’s looking forward.

Fiddler on the Roof plays eight performances, May 17 through May 22, at the Cadillac Palace Theatre, 151 W. Randolph St., Chicago. For more information and tickets, see www.BroadwayInChicago.com