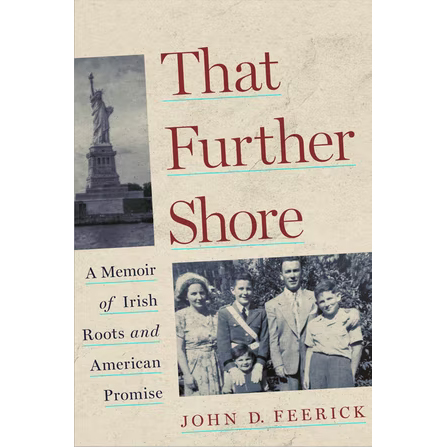 John D. Feerick’s life has all the elements of a modern Horatio Alger story: the poor boy who achieves success by dint of his hard work. But Feerick brought other elements to that classical American success story: his deep religious faith, his integrity, and his paramount concern for social justice. In his memoir, That Further Shore: A Memoir of Irish Roots and American Promise, Feerick shares his inspiring story, from his humble beginnings born to immigrant parents in the South Bronx, going on to practice law, participating in framing the Constitution’s Twenty‐Fifth Amendment, serving as dean of Fordham Law, and serving as President of the New York City Bar Association and chair of State Commissions on government integrity. Beginning with Feerick’s ancestry and early‐life experiences, including a detailed genealogical description of Feerick’s Irish ancestors in County Mayo and his laborious quest to identify them and their relationship with one another, the book then presents an evocative survey of the now vanished world of a working‐class Irish Catholic neighborhood in the South Bronx. Feerick’s account of how he financed his education from elementary school through law school is a moving tribute to the immigrant work ethic that he inherited from his parents and shared with many young Americans of his generation. The book then traces Feerick’s career as a lawyer and how he gave up a lucrative partnership in a prestigious New York City law firm at an early age to accept the office of dean of the Fordham School of Law at a fraction of his previous income because he felt it was time to give back something to the world. John Feerick has consistently shown his commitment to the law as a vocation as well as a profession by his efforts to protect the rights of the poor, to enable minorities to achieve their rightful place in American society, and to combat political corruption. That Further Shore is an inspiring memoir of how one humble and decent man helped to make America a more just and equitable society.

About the Author John Feerick is a professor of law at Fordham Law School and the occupant of the Sidney C. Norris Chair of Law in Public Service. He teaches and writes in areas of the Constitution, legal ethics, and conflict resolution. His books include the third edition of The Twenty‐Fifth Amendment: Its Complete History and Applications, and From Failing Hands: The Story of Presidential Succession, which was helpful in framing the Constitution's 25th amendment.

Praise for That Further Shore: “John Feerick elevates any place that he is a part of. It's not simply his numerous accomplishments as a dean, as a leader of legal education, as somebody who has been so fundamentally a part of our legal world‐not just in New York, but in the nation—it's the values that he brings to everything that he does that makes all of us want to follow him, that makes us all feel that the world is a better place because of who he is and what he does.”—Chief Judge Robert A. Katzmann, US Court of Appeals for the Second Circuit, as quoted in the Cardozo Journal of Conflict Resolution “The name of John Feerick is renowned here in New York, and rightly so. Those of us who so admire him wonder, ‘Where did he get this faith, wit, wisdom, and love?’ With this fine read, now we know!”—+Timothy Cardinal Dolan, Archbishop of New York “I came to know John Feerick well when he became the Dean of Fordham Law School; and I, like all in legal education, soon came to see him as a beacon for those who view the law as a sacred instrument. It was no surprise to us that, after his illustrious tenure as dean, he devoted his formidable talent to serving our city and the bar. This terrific book tells that story. But, more importantly, it shows how the public man we know was molded in the tradition of Irish‐Catholic familial love and sustained by the continuation of that spirit in the family he has built with his love, Emalie. This is a special book about a very special man.”—John Sexton, President Emeritus, New York University “When John Feerick received the ABA Medal, he thanked his parents for assuring that he and his siblings received a good education. His touching and inspiring book appropriately begins with his family's story. John's early years assured he would have an indefatigable quest for learning and teaching. This book takes the reader through a career that unbelievably was accomplished by only one person. Each chapter is an exciting journey filled with fascinating stories. I could not put it down!”—Linda Klein, Past President of the American Bar Association “Take heart! That Further Shore proves that a great man can be a good man. While living a life of the highest achievement on the world stage—and even changing history a time or two—Dean John Feerick stays rooted in his family, faith, Irish heritage, and his commitment to social justice. Inspiring!”—Mary Pat Kelly, PhD, author of the bestselling Galway Bay, Of Irish Blood, and Irish Above All “This book is about how one man with ethics and integrity can impact the public good. In a real sense, John Feerick’s journey is the story of America, its immigrant roots, and the opportunity we each have to make a difference.”—Honorable Jonathan Lippman, Former Chief Judge of the State of New York “This is a truly American story. The child of immigrants of limited means but deep religious faith and great hope for the future, John Feerick became one of the most celebrated lawyers of our time, making a powerful impact as a civic reformer, law school dean, scholar, law firm partner, advocate for justice, and co‐drafter of a constitutional amendment. This is a touching and deeply human account of a life extraordinarily well‐lived, and ### it is as engaging as it is inspiring.”—William M. Treanor, Paul Regis Dean Leadership Chair, Dean & Executive Vice President, Georgetown University Law Center “In this memoir, John D. Feerick, FCRH '58, LAW '61, dean emeritus and Norris Professor of Law at Fordham Law School, reflects with characteristic humility and humor on his upbringing as the eldest child of Irish immigrant parents in the South Bronx, his landmark role in framing the U.S. Constitution's 25th Amendment during the 1960s, his leadership as dean of Fordham Law for 18 years, and his commitment to a life lived in the service of others.”—Fordham Magazine “This is an exceptionally well written book and a compelling story of one Irish‐American lawyer who loves his Irish heritage, his family, his Church and the law. It took Feerick 18 years to write the book and it was certainly worth the effort.”—Irish in America “That Further Shore is a testament to Dean Feerick's legacy of compassionate service to others, as well as a ‘master class’ for future generations on how to live a good and dignified life.”—New York Irish History That Further Shore: A Memoir of Irish Roots and American Promise John D. Feerick Foreword by Thomas J. Shelley Fordham University Press; Paperback; March 15, 2022 ISBN: 978-0-8232-9911-9 | Autobiography | History | Politics | $19.95 456 pages, 25 b/w illustrations