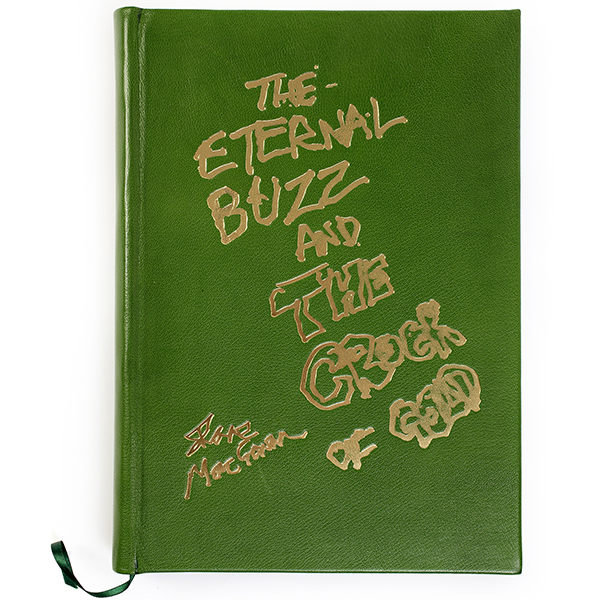 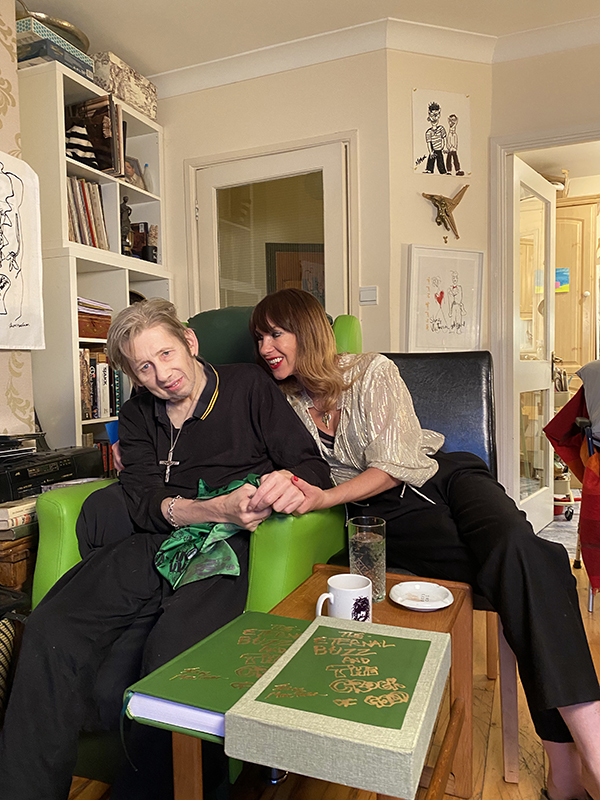 “This is a gateway into the torrent of mercuric, violent, rude, sexy, blasphemous, bollock-naked and occasionally tender imagery that forms the mental and emotional landscape of Shane MacGowan.” - Waldemar Januszczak

“MacGowan has been drawing since he was a child, when he would get a new set of Faber-Castell colored pencils every Christmas…The book’s punky drawings — doodled on everything from hotel stationery to vomit bags — date to the 1980s; most of them were recovered about two years ago from a black trash bag stored in [Victoria] Clarke’s mother’s attic.” - from Mark Yarm’s profile for the New York Times

Musician, artist, frontman, creator and punk icon Shane MacGowan announces his first ever art folio book ‘The Eternal Buzz and The Crock of Gold’, published by Rain Street and Infinitum Nihil and due for release in April 2022. The limited edition book cracks open the door to a treasure trove of Shane’s sketches, paintings, self-portraits, wild impressionistic compositions and playful character studies, set alongside handwritten lyrics, stories, photographs and abstract snippets dating back to Shane’s childhood and journeying through six decades of punk and Irish revelry.  The book is available to pre-order now via store.shane macgowan.com.

Shane is known for musical masterpieces Fairytale Of New York, Streams of Whiskey and A Pair of Brown Eyes - The Eternal Buzz and The Crock of Gold offers a visual backdrop to these and so many of Shane’s glorious songs from The Nips, The Pogues, and The Popes. This book is a labor of love from Shane and those close to him, curated by his wife and collaborator Victoria Mary Clarke, edited by Paul Trainer, with forewords by Johnny Depp and art critic Waldemar Januszczak.

His first ever art folio book introduces a barely explored branch of Shane’s artistry, in an era of celebration of Shane’s work and life. The recent acclaimed documentary, Julien Temple’s Crock Of Gold (2020) has focussed renewed attention on Shane around the world, reaching fans old and new, with a new biopic produced by Johnny Depp in the works too.

Shane’s love of art has been with him his entire life, a talent he nurtured and studied from an early age. “I was always into drawing and painting, and I used to do all sorts of things, hurlers,  IRA men, teenage punks hanging around in cafes, you name it…” says Shane of his artwork.

He continues, “When I was about 11 or 12 I got heavily into studying history of art and looking at old paintings and modern paintings, I knew a lot about art. It’s one of the only O Levels I got, was in art. I did the album cover for The Pope’s album ‘Crock of Gold’ and  I designed the Pogues first album cover, ‘Red Roses For Me’. And I more or less designed the second album ‘If I Should Fall From Grace With God’. In terms of my materials, I like pastels but I don’t really think about it. I’ll paint or draw on anything, with anything. I like more or less everyone from Fra Angelico and Giotto to the latest, like Caravaggio was the last of the Renaissance, before it went into Expressionism.

“I love Cezanne, Gauguin, Monet, Manet. I love the Irish impressionists, Lavery, Jack B Yeats, Brendan Fitzpatrick. The 20th century impressionists who painted the period of Ireland fighting for its freedom.  I like Max Ernst, the surrealists, Dali, Chagall… God there’s millions of them.”

Over the next five decades, Shane continued to draw, sketch and write at any chance he could, wherever he was in the world - from the back of a car on the road to a napkin in a cafe. Every single piece of artwork was kept, and it wasn’t until decades later that many of the artworks were unearthed in an unlikely way.

His wife Victoria Mary Clarke explains, “When we were making The Crock of Gold documentary, Julien Temple wanted some of Shane’s drawings so I asked my mum to have a look and see if she had any.  She sent me a bin bag full of drawings and lyrics that I had asked her to look after twenty five years ago, we didn’t even know it existed, it was miraculous, like finding a crock of gold! His art brings back lots of very funny and often hideous memories of different stages in our life together, a lot of his drawings have been done on my shopping lists and my own diaries, and on things like sick bags and hotel note-pads, airline sick bags and recording studio sheets, and diaries, so it is easy to know exactly when they were made.

“I love the way that the drawings and notes and scraps of stories provide an insight into Shane’s songs, it is like walking into his studio and seeing everything that was happening in his mind. The illustrations are like a visual tapestry of the inner workings of his creative process.  I feel very privileged and very excited to be able to share them with the world in a book, especially for people who love the songs.”

As the esteemed Sunday Times art critic Waldemar Januszczak puts it in his introduction to the book, “This is a gateway into the torrent of mercuric, violent, rude, sexy, blasphemous, bollock-naked and occasionally tender imagery that forms the mental and emotional landscape of Shane MacGowan. It’s the spit, snot and tears of art. Splattering onto the page in a psychic storm of lines, words and colour….”

He goes on, “When pop stars like Bob Dylan, Ronnie Wood and Lou Reed become artists, they lose touch with the wildness within. They forget they are rebels, and get all respectable on us. They want to be taken seriously. At least most of them do. So... is this also true of Shane MacGowan? Don’t be an eejit! Of course not! Art cannot tame Shane for the same sorts of reasons that no one has ever tamed a Tasmanian devil. It can’t be done.”

Johnny Depp, who collects Shane’s art, writes in a foreword for the book: “It’s rare for a creative genius like Shane to have one avenue of output. Such an incendiary talent is likely to have a multitude of facilities whereby his talent might infiltrate the atmosphere and change the climate as we know it. And so, revealed here, is Shane’s propensity for the wild, for the absurd, for the political, for the beautiful, all funnelled and threaded through the needle of his pen. But, this time, not via the tool of language. Instead, Shane’s visual acuity will take the lead here. His visions will speak for themselves. Sometimes they will invoke wonder, sometimes they might appear decidedly threatening, but, regardless of medium, his work will always be full of poetry - a bit  like the great man, and my great friend, himself; the artist, Shane MacGowan.”

Full details on the art folio and how to reserve a book are available at store.shanemacgowan.com.