Irish Studio Media announces the history-making 70th anniversary of Ireland of the Welcomes, the world’s largest and oldest continuously published Irish interest magazine. Since its first edition in May 1952, six editions have been produced every year.

This special anniversary issue’s cover will, in fact, be an homage to the original May 1952 cover, featuring a dream-like shot of Errigal mountain, in County Donegal.

Tourism Ireland’s Executive Vice President of North American and Australia/New Zealand, Alison Metcalfe said “Tourism Ireland is delighted to sponsor the 70th Anniversary Issue of Ireland of the Welcomes. The magazine has played an integral part in Ireland’s successful tourism journey over the last seven decades and has inspired many international travelers to visit the island of Ireland during this time. Tourism Ireland is proud to be a long-standing partner.” 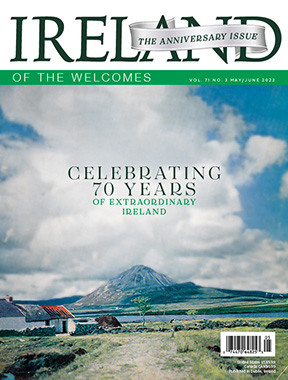 Ireland of the Welcomes is commemorating its platinum celebration by opening its library of past issues highlighting famous photo essays on Irish land and landmarks, original articles from noted contributors, such as Patrick Kavanagh, John Hinde, and Seán Ó Faoláin.

Ireland of the Welcomes has long been famous for its insightful and unique photography of historical moments and monuments that shaped Ireland’s traditions which today remains a favorite with its subscribers.

Ireland of the Welcomes is inviting readers to experience the story of Ireland the way previous generations did - with pages and pages of stunning words and pictures.

“It’s a wonderful thought that generations of subscribers have been reading our magazine throughout the decades,” Kate Hickey, CEO of Irish Studio Media Publishing said.

“We’re proud to continue producing a travel, history and culture magazine that brings a little bit of Ireland into our subscriber’s homes.”

Inside the special issue, readers will find one-of-kind incredible articles such as painter Paul Henry celebrating the beauty of the west of Ireland, author Brendan Behan celebrating the wonder of a Kerry accent, poet Patrick’s Kavanagh musing on County Monaghan, and many more treasures from our past as well as musings in the present on the past 70 years.

Ireland of the Welcomes began as a showcase for the Irish Tourism Board as the premier publication for visitors to Ireland, and Irish Studio Media has continued that legacy as the magazine focuses on Ireland’s past, present, and future always with the eye of today’s spirited traveler in mind.

Irish Studio Media, the owner of Ireland of the Welcomes, is a leading proponent of Irish business concerns and is the proprietor of Irish Central, the leading Irish digital media company in North America as well as the Irish Heritage Tree Program and the Irish Central Box Initiative.

Executive Chairman Liam Lynch said "To mark the 70th anniversary of Ireland of the Welcomes magazine is an amazing honor for Irish Studio Media but more than that it is a celebration of our deep-rooted relationship with the Irish community all around the world. Knowing that we have been able to unite so much of the Irish Diaspora population through the spirit of Ireland of the Welcomes is truly rewarding and greatly appreciated."

Kate Hickey added “The land of a hundred, thousand welcomes, Irish Studio looks forward to the next 70 years of creating a wonderfully engaging magazine bringing the best of Ireland to our readers.”